"Where we Worship God with our Mind, Body, Soul and Spirit."

Thought for the Week 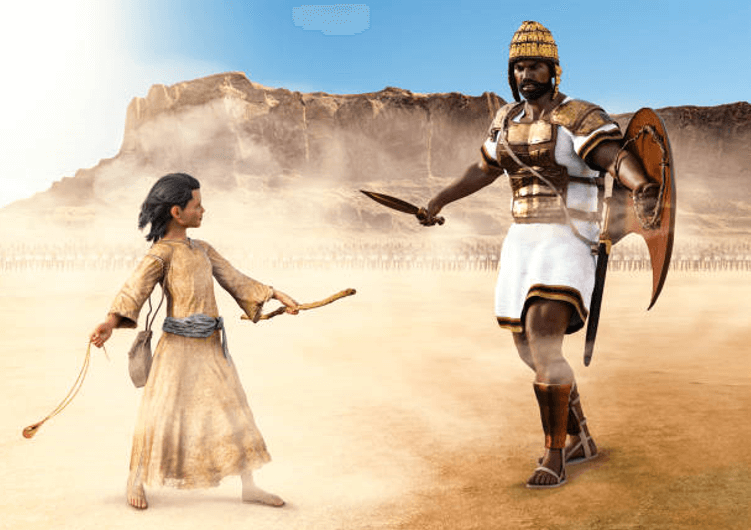 Let’s set the scene:
The Philistines were on one hill and the Israelites were on another with the Valley of Elah between them. For 40 days and twice a day, Goliath taunted the Israelites. It just so happeeds that at about that time Jesse (David’s father) sent him to the valley with food for his brothers who were serving on the front line.
David heard them speaking about the challenges that Goliath issued day after day. David inquired about the rewards that King Saul was offering to the one who would champion the Israelites and defeat Goliath. Eliab, David’s older brother became angry and called David prideful and dishonest. But King Saul heard of the boy that inquired of the reward and summoned him.

It was common practice to settle battles by Champion vs. Champion from each camp involved in the conflict.

The Israelites had been looking at Goliath as undefeatable. But David saw a man defying God. See once you get a God perspective of your problem you will remember, “I can do ALL things through Christ who strengthen ME,” and that “if God be for you, who can be against you.”

This knowledge gave David the boldness and confidence to tell King Saul not to worry about Goliath, and then stated that he would fight the Philistine.

David begins to give his own record of slaying lions and bears. He then promised to do the same to Goliath because the God who saved him then would save him in this thing. David’s confidence was in God not himself!

David prepared for battle with his five smooth stones and a sling. Upon approach Goliath became angry and shouted insults at David and the Israelites. David was not fearful of the giant called Goliath instead he shouted back, but about His ALMIGHTY God!!!

David broke it down for Goliath. He said, Today the Lord will conquer you and I will cut off your head and the whole world will know there is a God in Israel!

David said God did not need weapons to rescue His people and that the battle is the Lord’s not our!!

Then he ran out to do battle with Goliath. David did indeed cut off Goliath’s head with his own sword. Note: In those days armor was made to fit the warrior, so remember that Goliath was approximately 9 ft 6in tall meaning his sword would have been extremely large and long.

This experience provides today’s Christian with Battle Strategies when we face our own version of a giant coming up against us.

David had already been anointed by Samuel in 1 Sam 16; he knew that he was chosen by God to be the new King of the nation of Israel. We are also anointed, appointed, and called to do something for the Kingdom of God. Once you know what that thing is, do as David did. He acknowledged that it would be so in God’s timing. You must have faith. You must know, acknowledge, and then receive what God has for you!

David’s preparation included past dependencies on God for deliverance, the lion, and the bear. Never forget the things that God has done for you because they are building blocks for your faith and trust in God. See King Saul tried to prepare David by giving him his armor, but David was wise enough to know that he could only do battle with the full armor of God!

David’s confidence was completely in God! Never once did he say because I am a good shepherd or that I am a skilled warrior. No, he said that my God will give you over to me this day!!! Too often we depend on our intellect, wealth, or status to build confidence. These things are fleeting. We must depend on the ONLY constant. He will never change! God is OUR CONFIDENCE!!!

At Wholistic Life Ministries, we believe that the Mind, Body, Soul and Spirit are separate entities that make up the complete human being. Our approach to ministry is one that fosters a cooperative relationship among all entities. This will lead towards optimal attainment of the physical, mental, emotional, financial and social aspect of Serving God. As we teach more about the impact of these entities on the whole person, we will be able to make changes and minister to our own life, the lives of our family members, and be able to minister to people in the local and surrounding community, and communities abroad.

At Wholistic Life Church, we believe that the Mind, Body, Soul, and Spirit are separate entities that make up the complete human being. Our approach to ministry is one that fosters a cooperative relationship among all entities. This will lead towards optimal attainment of the physical, mental, emotional, financial and social aspect of Serving God.

As we teach more about the impact of these entities on the whole person, we will be able to make changes and minis-ter to our own life, the lives of our family members, and to people in the local and surrounding communities.

Your talent and time is just as equally important to us as your tithe. We have different gifts, according to the grace given us. If a person’s gift is prophesying, let him/her use it in proportion to their faith. If it is serving, let them serve; if it is teaching, let them teach; if it is encouraging, let them encourage; if it is contributing to the needs of others, let them give generously; if it is leadership, let them govern diligently; if it is showing mercy, let them do it cheerfully.
(Romans 12:5 – 8)

Helping people find their way back and move closer to God with Love, Grace, Authenticity, Originality and Sincerity.

Helping people through life’s journey, addressing the needs of their mind, body, soul, and spirit.